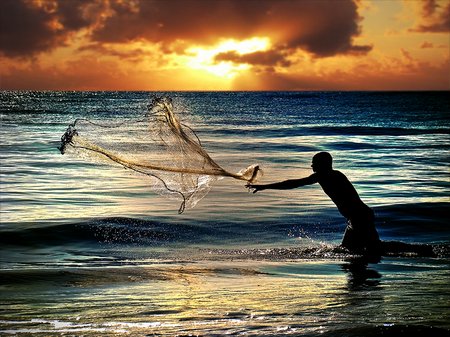 There they were – fishermen (or fishers if you like) returning to their vehicles after dark, packing their rods and tackle into their trunks. Even if they did catch a few big ones, was the pain and mess worth it?

Black flies, mosquitoes, and moths swarming that fish hole. And then consider the scratches from the low branches, scrapes from slipping off a slimy rock, bleeding index finger from a hook jab and then sticky and stinky from the hot humid summer evening. But yet, some people just love every minute of it. Some are up before sunrise and others are there still fishing at dusk.

A good friend of mine tried to teach me how to fish. While he reeled them in, I stood nearby waiting for a nibble. I would watch how he baited his hook. I would try casting my line like he cast his. I would try to be patient too. Seeing how futile my efforts were, he would sacrifice his fertile fishing spot to encourage me. I would stand where he stood and try fishing in the same hole and occasionally I’d pull in a fish. Perhaps if I had kept at it, I would be an avid fisherman today.

Peter and Andrew were experienced fishermen. They knew the Sea of Galilee like the back of their hand. A short time before, they had a life-changing encounter with Jesus – the salvation experience. (John 1:35-42). But on this particular day they were working with their nets near the shore.

A voice spoke to them from the shore – a familiar voice it was:

While walking by the Sea of Galilee, he saw two brothers, Simon (who is called Peter) and Andrew his brother, casting a net into the sea, for they were fishermen. And he said to them, “Follow me, and I will make you fishers of men.” Immediately they left their nets and followed him. Matthew 4:18-20 ESV

No, it won’t be easy work. There’ll be scrapes and cuts involved in this type of fishing too. There will be annoyances and aggravating factors – a different breed of mosquitoes. It will be grueling work – whether it’s a hot and humid day or not. And yes, while others bask their toes in the warm waters of a vacation beach, you may be hard at it – fishing! While others sleep, you may be up early. While others are crashing at the end of the day playing Scrabble online, you may still be fishing.

Fishing for trout or bass or Coho salmon or steelhead? No!

Fishing for precious souls lurking in the dark holes of the sea of sin. Fishing for sinful women swarming some old underwater shaded stump. Foul mouthed men gathered around some murky hidden spot in the lake of wickedness. High-end people swimming in the current of success and the good-life.

Jesus said: “Come after me and I will make you fishers of souls – I will show you how to do it. Watch Me closely. Learn from Me. Be My disciple.”

What impressions would be made as Peter and Andrew followed Him closely every day. They would study the type of people He singled out and how He started up a conversation with them. They would closely observe the compassion He showed toward each sinner. They would see that fishing for people is real heart work. How thrilling it must have been to see Him in action – reeling in a sinful, forlorn reject out of a societal cesspool?  Discontented and restless sinners finding peace with God.

The more closely they followed Jesus, the more effective their own fishing expeditions became. He was turning them into fishers of men.

Are you following Christ closely? Are you close enough to Him that He can give you further instructions on how to become more effective in your fishing expeditions for lost souls? Are you doing your share of fishing for the Lord? When last have you put out the Gospel line with a baited hook or lowered the net for spiritual fishing?

Are you willing to endure as much discomfort and inconvenience in fishing for souls as you gladly put up with when fishing for salmon or trout?

Walk carefully and closely with the Lord today.
Warmly in Christ,
Peter Ramsay

Who Did I Really Offend?

Lord, Give Me Faster Legs to Run